A common buzzword used in the car audio world is car subwoofer SQ or Sound Quality. SQ is much more difficult to quantify than say, SPL, the sound pressure level (the boom in subwoofer). Although there is no hard spec that identifies SQ, it is always good to talk about sound quality in a car sub.

If we define subwoofer SQ as the accurate reproduction of the low frequency (bass) signal input to the low frequency (bass) output, there are big differences from one sub to another. Generally, more expensive subwoofers are built with better voice coil control, among other features, that improves the sound by reducing distortion and reproducing the input signal more accurately. And note that this control becomes more difficult as the music is played at higher volumes.

Some subs are designed and/or tuned with enclosure design, to achieve more SPL even at the sacrifice of SQ. Some customers don’t worry about sound quality, only that their subs rattle neighborhood windows, and more power to them. But what about enthusiasts that want their music to sound like the original even at high volumes?

If the “SQ car subwoofer” is meant to be superior in sound quality, then voice coil control is an important factor to evaluate. Controlling the voice coil attached to the cone to accurately follow the tiniest input signal differences and the most dynamic signal changes makes the difference in music clarity and quality. It means your music sounds as the artist intended with nothing being lost.

And if the subwoofer is not designed well, distortion, aka noise, can be introduced into the music that further degrades the quality of the original.

MTX Audio knows car subwoofers. We have designed some of the most iconic models ever released. Competitors around the world have won numerous competitions based on SPL and SQ using MTX subwoofers. We are introducing our new 95 Series ‘Superwoofers’.If there ever was a subwoofer that could be called both a superior SPL sub and a superior SQ sub, this is the design.

These are tricky specs to measure in any fashion since enclosure and vehicle type vary so differently from one system to the next. There are many variables to figure into the equation. But we welcome honest tests where the environment is identical and measurements are accurate. We feel confident you will be impressed with MTX.

So is it useful to talk about SQ versus SPL subwoofers? Yes, sound quality is important. Your ears literally get tired listening to distorted music. And the bass instruments and reverberations just don’t sound as crisp or hard hitting as the original performance. That’s not good. And the best subwoofers can hold control even at loud volume. That is why great musicians spend a lot of dollars on their concert speakers.

So whether you are into SPL or not, SQ is something to pay attention to as you choose a car subwoofer. There is no spec that will you tell which sub has better SQ than another, but pay attention to subwoofer technologies that can help predict performance before you make your decision. 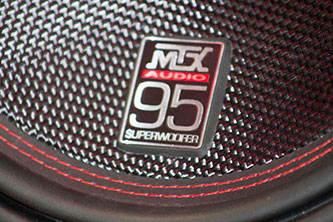 Most car subwoofer enthusiasts start shopping for their new system once they have decided on the quantity and size of subwoofers they want to buy. After all, subs are the main part of the system that creates the window rattling, body-panel-flexing bass they crave!

But a common mistake when choosing subwoofers is that the higher the power handling rating, the louder it will sound. This assumption is perfectly logical, but not always true.

To understand this tradeoff, you need to know what makes a subwoofer loud (SPL) and some basic physics. Now, don’t expect this post to be a science lesson with a bunch of technical equations and diagrams. This is a basic explanation of SPL and subwoofer power handling.

First, some definitions you need to know:

As a disclaimer, remember that a manufacturer can put any incredible number they want for their "Peak" or "Max" power ratings and many manufacturers do this as a marketing tactic to get customers to believe their product will be louder, better, more powerful, etc… You can't cheat physics; anyone afraid to publish their data is probably not being 100% honest about their ratings.

Sound is created by vibration of an object. The vibrating object causes air molecules nearby to move in waves. The more air molecules that are moving, the louder the sound waves will be. As the number of air molecules moving within the interior cabin of your vehicle increases the air pressure increases. This is called sound pressure. The Sound Pressure Level (SPL) is the measurement of this pressure in decibels (dB).

So in the simplest terms, the more air you move, the more SPL will be generated. So go buy a bunch of 18” woofers and you will be loud. Right? Not necessarily. There are other factors to consider. An 18” woofer has a lot of surface area to move air molecules, but can the woofer move a lot of air? This is where Xmax comes in. If the 18” woofer can only move 1/16th of an inch, it’s not going to move much air and therefore will not be very loud.

Well… A lot of engineering! It takes a good suspension (spider) that can handle the movement while maintaining linear motion. If a subwoofer does not stay linear, it will create distortion, or worse cause a rub or short of the voice coil against the pole piece causing damage to the subwoofer. A quality suspension is very important.

Additionally, you need a strong magnetic field which uses AC current to push the woofer forward (positive) and pull the woofer backward (negative). This magnetic field is created by the interaction of the magnets on the woofer’s motor structure and the electrical current being transferred through the voice coil from your amplifier.

You could build a subwoofer with HUGE magnets weighing 200lbs each and a voice coil that is capable of handling 10,000 watts. That’s easy. But designing a suspension that can keep that power under control is the hard part.  If the suspension is too tight and rigid to control the power, it will limit the Xmax.

Mass is another factor that must be considered. Subwoofer A has a RMS power rating of 2,000 watts and includes huge magnets with a cone assembly made of aluminum that has a mass twice that of the cone assembly of Subwoofer B which has a RMS power rating of 500 watts with magnets half the size. Which subwoofer has the potential to be louder? This is in fact a trick question.

You can’t determine which subwoofer would be louder simply from this information. Subwoofer A can handle more power but it’s cone assembly is heavier and therefore it requires more power to move it. Xmax could suffer as a result. Subwoofer B can’t handle as much power but it’s cone assembly is lighter and therefore, it’s Xmax could be as good or better than Subwoofer A, thus moving more air. This is called efficiency or sensitivity and is rated in decibels (dB) and should always be measured at (1W/1m). After all, you don’t want to spend the extra money for a HUGE amp or tax your vehicle’s electrical system to power it, right?

As you can see, comparing the performance of car subwoofers purely based on the power rating is not a fair comparison. There are many other factors to consider.

And once you start the installation, consider enclosure design, speaker wire size, and power wire gauge to ensure your subwoofers perform to maximum potential. If you buy a subwoofer with an RMS power handling rating of 2,000 watts, put 2,000 watts to it. Under powering a subwoofer is often times worse for it than over powering.  Also make sure your vehicles electrical system can support a 2,000 watt amplifier. And remember a 2,000-watt amplifier (that truly produces 2,000 watts RMS) will generally cost you more than one rated at 500 watts.

So if you are in the market for a subwoofer, don’t be fooled by peak power ratings created by crazy math. These numbers don’t mean much. RMS Power ratings are what you want to notice. This spec doesn’t always reflect performance either, but I will leave this discussion for another article. Call our MTX Support Team if you want to discuss “the loudest subwoofer for your budget" further at 800-225-5689. To read more about choosing speakers, see our MTX Library