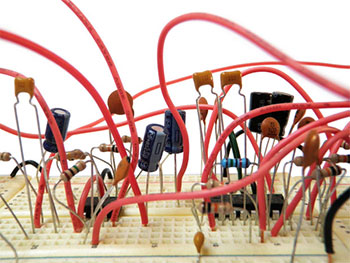 In order to install, design, or modify electronic devices in a car, a brief discussion of electricity and electronics background is necessary. The scope of this primer will be limited to real world application, and although far from being a course in Electrical Engineering, it will discuss all pertinent topics.

Atoms are made up of three smaller particles; protons, electrons, and neutrons. Electrons have a unit negative charge, protons have a unit positive charge, and neutrons have no charge. Usually there are an equal number of protons and electrons in an atom yielding a net zero charge. When some kind of energy (electromagnetic, chemical, etc.) is applied, some of the electrons may be broken free, thus leaving an imbalance of protons and electrons in the atom. This will result in the atom having a net positive charge.

The movement of free electrons from one atom to another is called current flow. Current always flows from negative to positive. A good analogy can be made with a water hose. The hose may be considered a conductor, and the water moving electrons. The current, measured in amperes, would be the volume of water passing by a point along the hose in a given amount of time. The higher the volume, the more current.

It also can be shown that a larger hose can move a greater volume of water (more current) than a smaller hose. This would correspond to the size of the conductor. A wire conductor’s size is called its gauge. The smaller the number, the heavier the gauge, and the larger the wire. Heavier gauge wire can conduct more current than a smaller gauge.

Most all conductors exhibit a property called resistance. Resistance impedes the flow of current. It is measured in units called Ohms. With the water hose, resistance could be regarded as friction between the water and the hose. A larger hose would create less friction and have a lower resistance than a smaller hose.

George Ohm and James Watt created equations that allow us to mathematically express the relationship between current, voltage, resistance and power.

Ohm’s law states that the potential difference (E, in volts) equals the product of current (I, in amperes) and resistance (R, in ohms).

Watt’s law states that power (P, in watts) equals the product of potential difference (E, in volts) and current (I, in amperes).

Notice that both Watt’s and Ohm’s formulas have current and voltage in them. We may then substitute the first formula for a term in the second or vice versa. All possible combinations are listed below:

Referring back to our water hose, the flow of water can be considered to be Direct Current (DC), meaning that current always flows in the same direction. If the valve that controls the volume of water flow could also change the direction of the flow, it would be called Alternating Current (AC). In general, audio signals are AC, and Battery Voltage is DC.

The resistor is a device that resists, or limits current flow. Their value is specified in ohms. A resistance to current flow creates heat, and as such, these devices have a maximum power dissipation, rated in watts. Placed in series with a voltage source, they limit current to a device. In parallel with a voltage source they make up a voltage divider. A potentiometer is a special type of resistor which, when the shaft is rotated, changes resistance via a sliding contact arm. They are used as volume controls, gain matching controls, etc.

If a circuit contains resistances in series, the total resistance can be calculated by adding all the individual resistances. The formula is straightforward:

Where RT is the total resistance, R1 through Rn are the individual resistances. As an example, suppose two 4 ohm speakers and an 8 ohm speaker were all in series.

If there are exactly two resistances in parallel, there is an easier formula to use:

An example would be an 8 ohm speaker in parallel with a 4 ohm speaker.

A capacitor is a device that resists change in voltage. It stores a charge. For our uses it will pass AC but not DC (while it is charging it will pass DC). Their value is expressed in Farads (or more commonly in microfarads). They have a working voltage (called DCWV) that must never be exceeded. They can be found in both polarized and nonpolarized versions. The most commonly used types are the electrolytic, mylar and poly (polypropylene, polystyrene, polyester). They are used primarily for filtration (in power supplies), noise suppression, and speaker crossovers.

For noise suppression, a capacitor is placed between the alternator, or component power lead, and ground. This will present an open circuit to the 12 volts DC once the cap is charged, but will provide a short circuit for the small AC “ripple”. Polarized electrolytics are most commonly used. They are much cheaper than the other types, especially in larger values. A minimum of 25 DCWV is needed for safe operation in a 12 volt system.

Another use for the capacitor is in speaker crossovers. Although they pass AC, their impedance is inversely proportional with frequency. Placed in series with a speaker, it forms a 6dB / octave high-pass filter. A nonpolarized capacitor must be used.

Electrolytic caps are the cheapest for their size. If using electrolytics for crossovers be sure that the DCWV is at least 100 volts for amplified systems. Using a cap with too small of a working voltage will usually cause the cap to explode. Mylar caps are a bit more expensive than electrolytics of the same value, but offer higher reliability and sonic improvement. Metalized film poly caps are very expensive, but offer the highest sonic quality in critical listening applications.

Note: Capacitance and resistance formulas are just the opposite. Just remember to add resistances in series, and capacitances in parallel.

An inductor is a device which resists change in current flow. Usually it has a low DC resistance but a high AC impedance. This means that it passes DC well, but does not pass AC easily. It is electrically opposite to the capacitor. Its value is expressed in Henries (more commonly milliHenries). There are two major types of inductors, air core and iron core. The other important factor is the gauge of wire that is used to make the inductor. The heavier the gauge, the less signal loss and the higher the current capability. For a given value and wire gauge, air core inductors are more expensive, but they do offer some benefits. The greater the current flowing through an inductor, the larger the magnetic field produced. With iron core inductors, there is a point where the core saturates and no greater field may be produced. At this point, severe distortion sets in. Air core inductors for the most part do not exhibit saturation.

A diode (or rectifier) is a semiconductor which allows current to flow in only one direction. It can be used to change (rectify) AC into DC. The two leads of a diode are labeled anode and cathode. A diode is said to be forward biased when its cathode is at least .7 volt more negative than its anode. A diode is reverse biased when its cathode is not at least .7 volt more negative than its anode. Forward biasing a diode causes current to flow, and reverse biasing causes no current to flow. Although there are numerous types of diodes, the ones of interest to the mobile electronics installer are power diodes, or rectifiers. A rectifier’s value is expressed in amps, and is the maximum forward current which the device can safely handle.

There are other parameters which are of importance when selecting a rectifier. The peak inverse voltage (PIV) is the highest voltage which can be present while the rectifier is reverse biased.

Transistors are semiconductor devices which either act as current amplifiers, voltage amplifiers, or switches. The two most often used in mobile electronics are the bipolar and the metal oxide semiconductor field effect transistor (Mosfet). They act as “valves” where a small change in control current or voltage on the input yields a great change in current or voltage at the output.

Mosfets are more similar to vacuum tubes in operation than bipolar transistors. They are transconductance devices, which means that the input works on voltage only without the need for current. They have extremely high input impedances. They act primarily as voltage amplifiers. Mosfets do not exhibit thermal runaway like bipolars do, as when Mosfets get hot, they actually allow less current to flow.

Kirchoff’s voltage law states that the sum of the voltage rises and drops in a closed loop circuit is zero.

What this means is, that in a series circuit the current flow through a circuit is the same at all points. With this in mind, we can determine the voltage drop across a resistance based upon the current and resistance.

This can best be described graphically as shown in Diagrams 5,6 & 7.