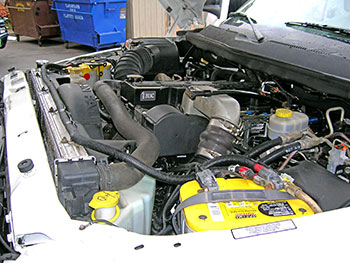 Let's start by defining the potential problem. Your car is setup from the factory with a battery whose primary function is to start the engine. The car has an alternator that keeps the battery charged and supplies power to anything on the electrical system, while the engine is running.

Adding a battery to your current car electrical system will store more power, but it will also increase the load to the alternator. You should calculate this load as well as the stereo system current draw, and consider upgrading the alternator to a larger output model before adding batteries. But maybe you can avoid this expense and labor?

Large audio systems typically use higher output and/or multiple amplifiers that can draw a large amount of current (amps) from the vehicle's electrical system. There are two possible scenarios that can be affected by this higher current draw:

The total current draw must be calculated before you will know if your existing battery and alternator can handle either of these scenarios. 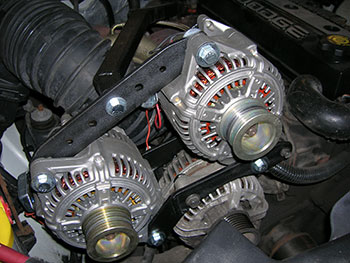 Music With The Engine Off

If your only concern is listening to the music while the engine is not running, then you can calculate the current draw of the new stereo and estimate approximately how long the battery will last. In most instances this can be calculated using the following formula:

If you plan on playing the stereo for longer than the resulting number from this equation, then you will need to add another battery. 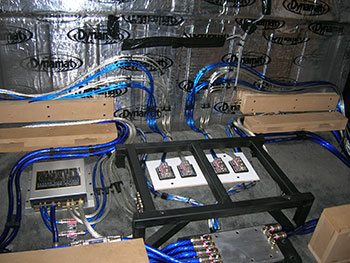 If your audio system current draw exceeds the output current rating of the alternator, then your dashboard, or headlights, may dim especially when loud bass notes hit. Not a good thing. Also, this power choke can affect the performance of your sound system leading to amplifier overheating and even shutdown, which is not a good result. You can calculate the amperage draw of your system using Ohm's law. In this case you can use the formula I (current) = P (power in watts) / E (voltage).

Adding a battery is the quick solution to this problem, but may not be the best solution. For example, a 2000W RMS amplifier will potentially draw up to 240 amps of current depending on the design and efficiency of the amplifier.  Even though the normal operation of the amp will probably run less than that on average, even half of that, 120 amps, is more than most vehicle electrical systems supply to run the entire vehicle. 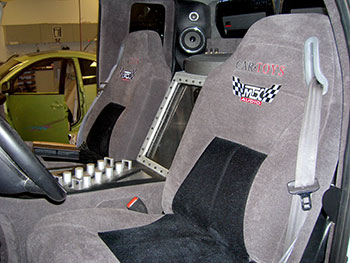 Most stock electrical systems use alternators that are between 60 and 120 amps. Even if you add batteries your stock alternator will still limit the amount of current that can be sent to the batteries. Although upgrading your alternator may be more expensive, in the long run your system and vehicle's electrical system will perform much better than just adding a battery.

Be sure to evaluate the cable between the alternator and battery to ensure it can handle the increased amperage too. Car manufacturers size this cable to act as limiting protection for the alternator in case of excessive current draw from a bad battery cell. Upgrading the ground wire is also needed if the alternator is upgraded to a higher output. If you stay with the factory alternator avoid changing the wires as well.

Consult your car audio installer or call 1-800-CALL-MTX for advice on current draw from your amplifier to see what options would work best for your system.